The establishment and style of the Oceania Province’s ‘drop-in’ mental health facility, “Haus Bung” at Madang, Papua New Guinea, has been influenced by an already well-established mental health service at Mzuzu, Malawi, Central Africa.  Consequently, the Province sent congratulations and a memorial gift (a didgeridoo) to the Silver Jubilee celebrations of the St John of God Hospitaller Services at Mzuzu.  The celebrations, which included the blessing and opening of a new mental health facility at Lilongwe, Malawi’s capital, culminated in a Thanksgiving Mass, celebrated at Mzuzu by Bishop John Ryan. 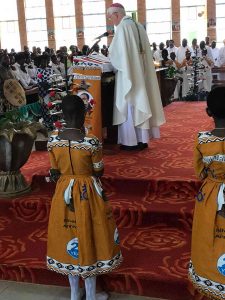 Today, St John of God Hospitaller Services at Mzuzu, care for and treat people with mental illness on both a residential and a domiciliary care basis.  Those served include elderly persons, children rescued from the streets of Mzuzu, children with disabilities and people with different addictions.  The Order also conducts an Institute for Vocational Training (IVT) to give a skill to clients recuperating from mental illness and to vulnerable youth.  It trains personnel for its services by means of a College of Health Sciences that offers two diplomas and two degrees.

Celebrating the Silver Jubilee were 305 co-workers and many volunteers who are involved in the hospitality mission on a daily basis, more than 250 students in the college, nine candidates for the Brotherhood, three Postulants, six Novices, Five Temporary Professed Brothers and one Solemn Professed Brother.  The Silver Jubilee celebrations brought the Order’s Prior General, Brother Jesus Etayo, to Malawi for the first time.  In his remarks to the Brothers and their co-workers he urged them not only to continue to provide high quality services but also to be heralds of a new and better future for those who suffer a mental illness. 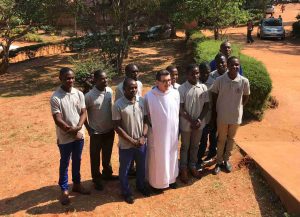