The John of God Tradition of Burying the Dead

Papua New Guinean members of the Oceania Province operate a service for persons with mental health issues at Madang in Papua New Guinea.  The operation of mental health services in the Melanesian culture often takes one down unusual pathways – as is illustrated by this report received recently from our Brothers in Madang.

In the course of their work they came into contact with a man who called himself Lambert.  Although Lambert had been well educated in financial matters, he developed severe mental health problems.  Over time the Brothers became Lambert’s main support and they helped him to reconnect with his family by phone and, eventually, they organised his return to his home village.

Early in December 2019 Lambert consumed some food that left him very ill.  In his illness he returned to the Brothers in Madang for help.  Medical attention and the care of the Brothers did not remedy the situation.  His mental state deteriorated, and he refused contact with other people and made a camp for himself on Machine Gun Beach (pictured) near the Brothers’ house. 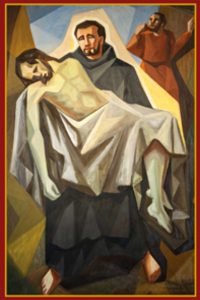 On the morning of Thursday, 12 December, the Brothers went to check on Lambert on the beach and found that he had died overnight.  They called for the ambulance to take him to the morgue but then discovered that the morgue was not functioning.  The Brothers, faithful to a tradition of burying the poor established by their founder, Saint John of God (pictured), took matters in hand themselves and prepared Lambert’s body for burial and organised a memorial service.

Then, with members and staff from “Haus Bung”, a drop-in mental health centre sponsored by the Order, the Brothers took Lambert’s body back to his village.  This involved driving for many hours.  Those who had accompanied Lambert’s body back to his village stayed with the family for two days to support and grieve with them before returning to Madang. Lambert had an out-going personality and was well known in Madang.  As one of the Brothers remarked, “Lambert will certainly be missed and there will less joy in Madang with Lambert’s passing.”