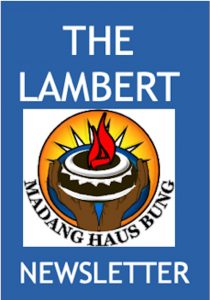 Elsewhere in News and Events on this site one reads of the death and interment of the first member of “Haus Bung” at Madang in Papua New Guinea – a man named Lambert.  “Haus Bung”, which has been functioning under the auspices of the Oceania Province for more than two years, is a day drop-in centre for people who are dealing with mental health issues.  “Haus Bung” has begun distributing a quarterly newsletter entitled “THE LAMBERT”.  The editor explains: “Our newsletter is called “THE LAMBERT” in honour of our very first “Haus Bung” member – Lambert.  He passed away in late 2019 and we honour him through this newsletter.

The lead story of the first issue is an account of the part that “Haus Bung” has played in improving the life of someone, who for reasons of privacy, we will call ‘Lenny’.  He says that he has “been a member of Haus Bung since 2018 and before joining “Haus Bung” I used to go around collecting tins.  Why? I used to smoke a lot of brus*, and my father does not give me money to buy smoke and that is why I decided to collect tins so I could sell them and get money to buy my brus.  I have epilepsy which also affected my mental health. It was very dangerous for me (collecting tins) but I still did it.  I had a lot of incidents when I had seizures while out collecting tins and people who know me (used) to go home and tell my dad and he came to get me.  Otherwise, if I do not show up, he knows that something bad has happened and so he comes himself to look for me.  I was not living responsibly or meaningfully until I came to “Haus Bung”.  To the question, ‘In what way has “Haus Bung” changed you?’ Lenny answers: “Well, look at me now! I am clean and well dressed, I’ve cut down on my brus intake, I do not care now whether I smoke or not.  I am well supplied with medication for my epilepsy and I feel much better. I am happy!”

Lenny sums up his experience of being a member of Haus Bung: I love the hospitality.  It comes with care and respect and I feel valued.  I want to be like that, putting smiles on people’s faces.”